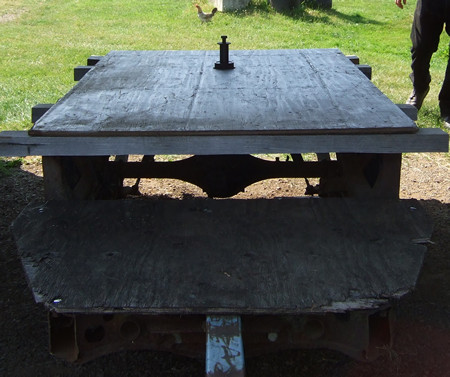 My sister worked her magic and I was able to mount the gearbox into the fully welded gearbox frame yesterday. The full dimension cured fir supports which hold up the mixer deck are all fastened down sans 4 bolts. Using wood instead of steel will provide a bit of flexibility and help reduce hard shock vibration/wear and tear.

Wad cut the hole in the plywood deck for the gearbox nose, but we can’t fasten the deck down yet as we need a few more bolts for a couple of the supports (one of which you cannot see). As soon as the remaining bolts are installed we’ll prepare the deck for the snout flap and get it fastened down. (Reminder to self – pick up piano hinge today.) If the deck seems abnormally long, it is. The front of the deck has room to hold the trash pump we will need for getting the mix into the forms. The trashy looking lower deck (plywood due to be replaced) will support a safety cage to protect workers from the PTO drive shaft.

We still have to collect a car inner tube (hopefully used and free) and build the flanges to hold the snout to the tank. Once we have those we can cut the holes in the tank for the gearbox and snout drain.

I’m considering mounting stopper blocks (this trailer will tilt to facilitate draining) around the perimeter of the tank to help take the strain off the four bolts that will hold the tank down. I’ll let you know how that goes.

One of our issues with this mixer will be the existing suspension. We aren’t making the classic tow mixer, so we didn’t consider changing the auto frame/suspension/axle a value added activity. To put it another way, we’re leaving all the original suspension items in place. This mixer is designed for stationary mixing (we live on a slope) which should greatly reduce the wear and tear on the mixer and trailer. At this point I’m not concerned about clearance for the tires during mixing. The deck can sink down and set on the tires during loading and mixing. If clearance proves to be an issue (having to move the mixer when it’s full <winces and covers eyes at the mess this will cause>) we’ll install spacer blocks between the axle and the frame before we start mixing. We will have to do a little experimenting to see what works, what needs cut off, what needs additional decking or supports, but for now we’ll leave things as they are until we’ve mixed our first batch or so.

I still have to get a pillow block to carry the tractor end of the section 80 drive shaft pipe that will bo between the tractor’s PTO drive shaft and the mixer gearbox shaft. The pillow block will mount under the full dimension lumber support which holds up the front edge of the mixer deck (upper plywood facing you in the photo).

I’ve still got to get a couple grade 5 bolts to use as shear pins on the pipe shaft, but I won’t do that until I’ve got the pipe. And I’ve got to get the original mower head trimmed, drilled and tapped to accept the mower blade. I’ll take the assembly in to our local metal shop and get that done some time next week. And at some point in this process Wad will replace the old plywood deck on the front of the trailer.

This entry was posted in House2 Construction. Bookmark the permalink.